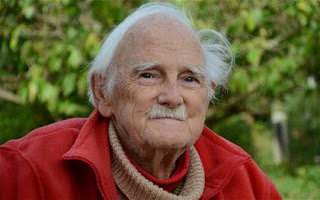 "Ken Clark, who has died aged 89, was among the leading ceramicists of his generation. His strengths included a sure feel for shape when designing solid objects such as candlesticks; masterly ability in imparting a particular hue to a glaze; and sureness of touch in applying a design to ceramics then firing.

Among his greatest triumphs was recreating the red lustre used a century earlier by the potter-novelist William De Morgan. This arose from a commission for red tiles by the film director Michael Winner. Clark went on to fathom the secrets of De Morgan’s other glazes, including those of Islamic origin which had been almost completely lost between the late Middle Ages and De Morgan’s rediscovering them in the 1870s." Link

Avid Gallery was privileged to exhibit his work in 2004.  We remember him with great affection and admiration.