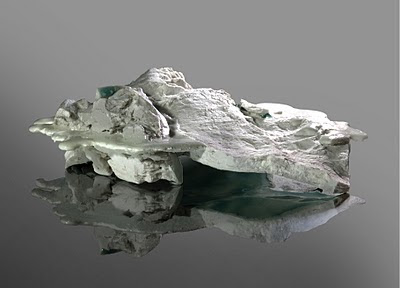 AVID is delighted to announce it has secured this exhibition of work by renowned Dutch ceramicist Jeroen Bechtold.  This exhibition which has previously been shown in The Netherlands will be brought to New Zealand in February 2011.


New Work: "15 claims", the art of climate change consists of 15 porcelain works reflecting the melting ice of the northern and southern polar regions.  The works are named for the claims of each country or company (Norway, Australia, New Zealand, Brazil, Exxon, Shell to name a few.)
Jeroen says about this work:
"A new adventure, a new body of work, dealing with the idea of melting ice...
The madness of nations claiming pieces of North or South pole just for the expectation of profit to be made.
The ice is melting, sea levels rise.
No nation deals with the apocalyptic future when millions and millions of people will relocate, as their lands submerge ...
Many nations deal with expectations of profits to be made as the minerals will be 'scoopable'
So far 8 nations claimed parts of the Antarctic and 5 nations divided the Arctic amongst each other..."
Posted by AVID Gallery at 1:10 PM